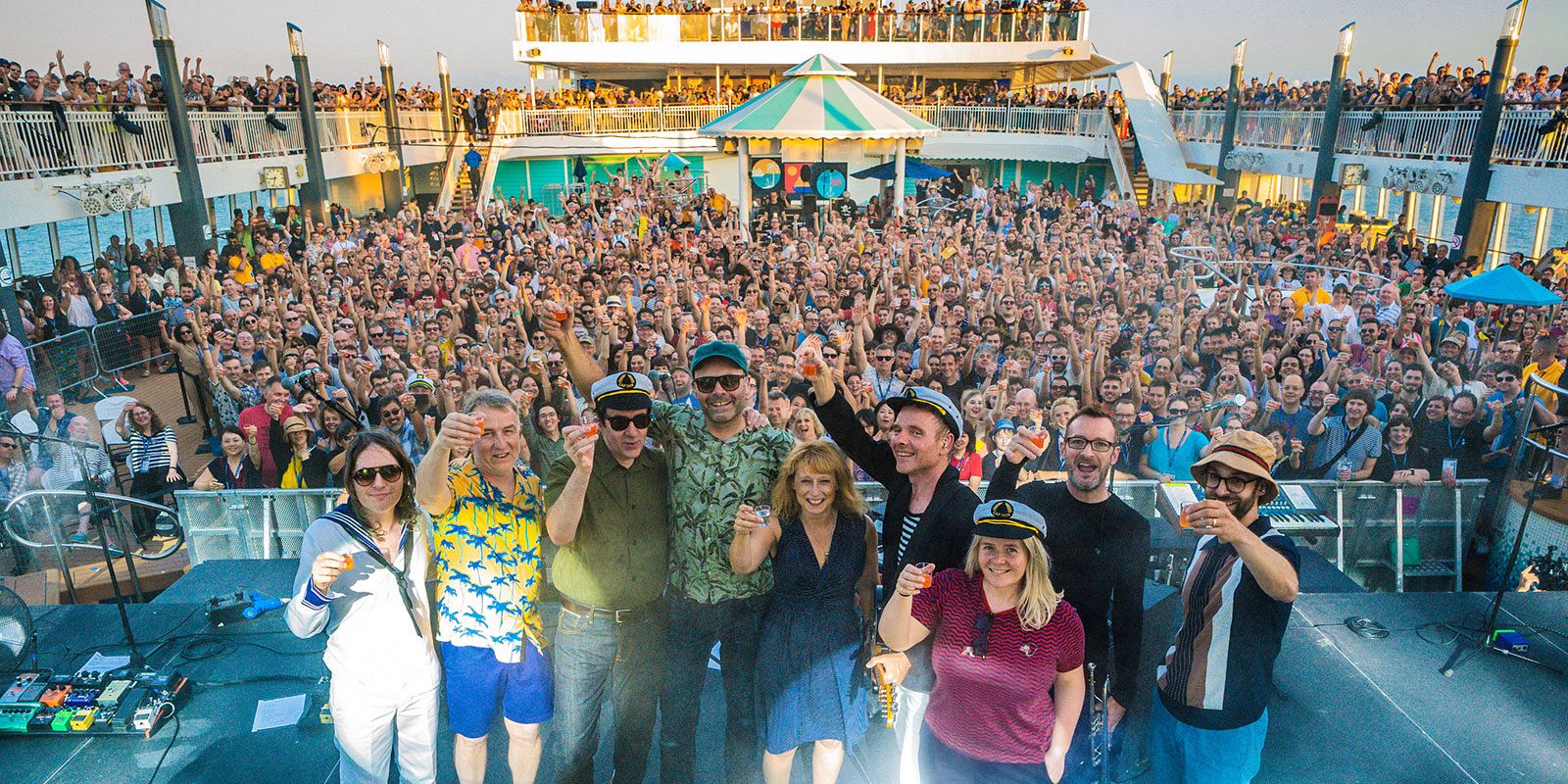 Moments That Make Life Rock
The Politest Mosh Pit
"It was like the greatest high school reunion, without all those painful school memories!"
Andrew T.
Bristol, England
Boaty Weekender Cruiser

August 11th was the last night of the incredible Boaty Weekender cruise and another chance to see the band Camera Obscura, this time in a very different venue. But more than that in a moment.

By this stage, we knew our way around the boat. We knew where the lifts were, and how to get from O'Sheehans Irish bar to the Spinnaker without hitting a dead end. We knew that if we followed the fish on the carpet, we would head to the front of the boat. We'd stopped worrying about the tipping and drinks packages. We were in our element. We were Boaties.

More importantly, we knew that if you grabbed some food and sat at a table that already had some people there, you would be welcomed and have a fun and interesting conversation. You had an instant connection with everyone - it was the like greatest school reunion, without all those painful school memories!

So, onto the Camera Obscura show in the Stardust Theater. The room felt special. There was feeling of anticipation and some sadness, since we knew we would all soon be going our separate ways. It was a much more formal gig than the previous evening and once again the band were on the money. Eventually we all stood up from our seats, and the politest mosh pit in the world formed in front of the stage. A personal highlight for me, was a beautifully tender version of "Books Written for Girls" a song that just kills me every time. I don't think I've heard Tracyanne sing it as poignantly as she did that evening.

There was also the heartfelt speech from her about how pleased she was to be on that stage with her brilliant bandmates and how the band was the love of her life. They finished their set, as they always do, with a rousing version of Razzle Dazzle Rose. That lovely moment is when the tenderest band turns into Metallica for the last few minutes.

Nobody wanted to leave the room. There were hugs and tears and eventually, we did edge away feeling that we had been part of something very special. There were still other gigs to catch (and great they were) and dancing to be done in the casino. Then up and out early the next day to leave the boat.

Thanks to all the bands, all the crew and all you lot, the fellow passengers for making it the most amazing experience. Most of all thanks to the brilliant Belle & Sebastian for putting the whole thing together.

Latest Moments
I stood there stunned for a good 5 seconds before saying... YES!
Cassius D.
Read
This one's for you, Dad.
Mike B.
Read
It was all about the music and the love!
Sheri and Noey B.
Read
The pure joy was felt and expressed in all the smiles around the piano.
Larry F.
Read
I still find glitter in random places that remind me of just how much fun I had.
Cale A.
Read
The Rock Boat has been so much more than just a vacation.
Melissa G.
Read
This was a once in a lifetime experience that I will be forever grateful for.
Michelle K.
Read
It felt like all barriers had been stripped away between us...
Maxim S.
Read
What happened changed the fabric of my world forever.
Dave F.
Read
It felt like that was the precise moment that we committed to one another, and it was truly amazing.
Kathy O.
Read
This was one of the greatest moments of our lives and one that we will forever cherish.
Stephan K.
Read
I feel like my passion for new music has been re-ignited.
Stephanie L.
Read
We partied like we were kids again
Steve and Barb L.
Read
Tell Us Your Moment Tell Us Your Moment!
© 2022 Sixthman. All Rights Reserved.   Privacy Policy   Cookies Policy
We use cookies to improve your experience on our website. By browsing this website, you agree to our use of cookies